Greenway Farms, the largest carrot producer in South Africa, will start marketing their own carrot juice under the well-known brand Rugani from August.

The company, which produces about 40% of the country’s carrots, recently asked the public at the Johannesburg Fresh Produce Market to test seven variants of the juice. According to Mr. Vito Rugani, the owner of Greenway Farms, it was a successful attempt to find out what the public’s taste preferences were.

“We will also promote our carrot juice through the same marketing channels as the fresh roots, namely the fresh produce markets of South Africa.
I strongly believe in the free market system that provides the central market here in South Africa. This facilitates a transparent pricing model and moreover it is here that the independent retailer to buy its products. This is where we want to sell our products.”

According to Ms. Jenna Badenhorst, marketing manager of Greenway Farms, the final installation work is currently being done at the large South African South juice plant. “The factory will be an extension of the existing packaging plant in Tarlton, 75 km west of Johannesburg.
The juicing equipment is imported from Italy and the total project cost about R100 million.”

The juice factory will produce about 145,000 litres of juice per week from about 240 tons of carrots. “To speculate how much juice we will produce is very dangerous. We are taking a chance with this expansion and hope for the best” said Rugani.

Greenway Farms currently sell about a million kilograms carrots a week in South Africa and other countries. 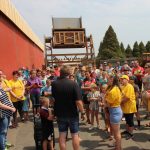